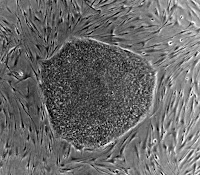 Applying a small mechanical force to embryonic stem cells could be a new way of coaxing them into a specific direction of differentiation, researchers at the University of Illinois report. Applications for force-directed cell differentiation include therapeutic cloning and regenerative medicine.

"Our results suggest that small forces may indeed play critical roles in inducing strong biological responses in embryonic stem cells, and in shaping embryos during their early development," said Ning Wang, a professor of mechanical science and engineering at the U. of I., and corresponding author of a paper accepted for publication in Nature Materials and posted on the journal's Web site.

Cell softness is an intrinsic property of embryonic stem cells and dictates how a cell responds to forces in its physical microenvironment. Those responses include how strongly the cell attaches to a surface, how far the cell spreads on a surface, and, most surprisingly, whether specific genes are expressed.

To study cellular sensitivity to force, Wang and his collaborators first attached a magnetic bead, 4 microns in diameter, to the surface of a living embryonic stem cell. Then they applied a tiny oscillating magnetic field, which moved the bead up and down. By precisely measuring the magnetic field and the distance the bead traveled, the effect of the mechanical force and how soft the cells are could be determined.

The cyclic nature of the mechanical force is very important, Wang said, as it simulates natural forces within a living cell, such as the cyclic movement of the motor protein myosin.

The researchers found that mouse embryonic stem cells were softer and much more sensitive to localized cyclic forces than their more advanced, differentiated counterparts.

"As stem cells differentiate, they become stiffer," said Wang, who is affiliated with the university's Beckman Institute, Micro and Nanotechnology Laboratory, and department of bioengineering. "The stiffer the stem cell, the less it spreads under stress."

The researchers obtained the same results when they applied cyclic forces to stiff human muscle cells. They did not experiment with human embryonic stem cells.

To study some of the long-term effects of localized mechanical forces on the behavior of mouse embryonic stem cells, the researchers utilized the expression of an enhanced green fluorescent gene. Cells expressing this gene glow fluorescent green when exposed to blue light.

As the mechanical force was applied in the researchers' experiments, the green fluorescence in cells with magnetic beads faded, indicating reduced gene expression. Control cells (without beads) a few microns away continued to glow.

"The softness of mouse embryonic stem cells makes them very sensitive to localized cyclic forces," Wang said. "If our findings can be extended to early animal embryos, they could provide a new way of locally differentiating a single cell of early lineage, while leaving nearby cells alone." 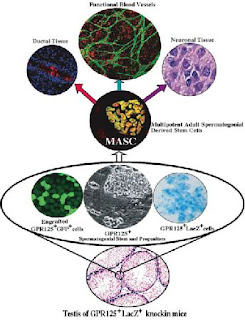 The work was funded by the National Institutes of Health, the U.S. Department of Agriculture, and the University of Illinois.